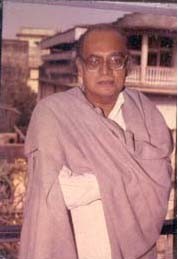 Primarily a theatre personality, Utpal Dutta was prominent actor of Bengali and Indian cinema. Dutta was born on 29th March, 1929 in Shillong. His father's name is Girijaranjan Dutta. Initially went to St. Edmont School in Shillong for schooling, and completed Matriculation in 1945 from St. Xaviers Collegiate School. In 1949, he graduated with English Honours from St. Xaviers College.


Forty years after the staging of classic play Kallol which entails the story as the mutiny of Indian sailors against the British on the Arabian Sea, for which he was even imprisoned, was revived in 2005, as Gangabokshe Kallol, part of the state-funded 'Utpal Dutt Natyotsav' (Utpal Dutt Theatre Festival) on an off-shore stage, by the Hooghly River in Kolkata.
The Last Lear, the 2007 English film based on his play Aajker Shahjahan on an eccentric Shakespearean actor, and directed for the screen by Rituparno Ghosh, later won the National Film Award for Best Feature Film in English.

n 1960, Dutta married theatre and film actress Shobha Sen. Their only daughter, Dr. Bishnupriya Dutt, is a professor of theatre history in the School of Arts and Aesthetics at Jawaharlal Nehru University, New Delhi.
On 19 August 1993, Dutta felt pain in the chest and suffered a massive heart attack. Immediately after he returned home from the S.S.K.M hospital, Calcutta, West Bengal where he had undergone dialysis.