No Father ,No Issue , Convert to Christianity


70 poor Hindu children in an orphanage converted to Christianity in Madhya Pradesh.

HENB | Bhopal | May 8, 2015: As per a report revealed by Anurag Upadhyay  in India TV, around seventy children of Saint Francis Sevadham, an orphanage at Shyampur in Sagar district of Madhya Pradesh, have been allegedly converted to Christianity. Name of Father Rogen Kristen, who administered the establishment earlier, has been mentioned in the column ‘father’s name’ of all 70 children.
The incident came into light after Omkar Singh, an RTI activist who works for the child welfare in Sagar, discovered that Rogen Kristen was being mentioned as father of these orphanage’s children.
The children in the orphanage also confirmed the allegations of conversion. Many children have forgotten their original identity including their names.
These poverty stricken children from mostly Tribal families of Hindu faith were admitted into the Saint Francis Sevadham for their meals, education and day-night stay. But after rigorous brain-wash and circumstantial pressure those children were cut off form their roots in  a very unethical way.
Meanwhile, the district administration is investigating how this happened. Though Father Rogen has left Sevadham, his replacement father Sanju has dismissed the allegations of forceful conversion but he admitted that he teaches children to practise Christianity.
Juvenile Justice Act clearly states that in such organisations, neither the name or the caste of the residing children can be changed.
Now, some Hindu outfits are searching the records and antecedents of the culpable Christian home engaged in a nefarious conversion ploy as alleged.
A partially tensed situation  prevails in the locality after the news come to the light.
The incident again exposes the Christian missionary agenda behind their so-called humanitarian work! Now, Govt of India, Govt of Madhya Pradesh (both run by BJP)  and the National Commission for ST must take immediate and stringent action against these conversion ploy.
A reliable source ascertains that  Saint Francis (Christian) Sevadham receives a huge foreign donation from America and Europe for the spreading of Bible and selling the faith of Jesus.
Courtesy: India TV. 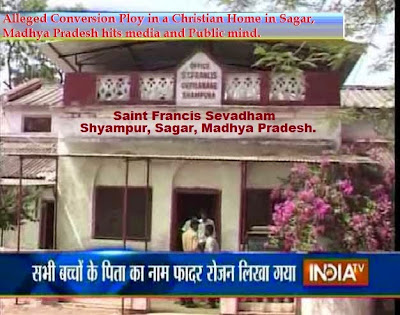 Posted by Mridul Nandy at 04:31 No comments: